Welcome to the Alternate Economy

Welcome to the Alternate Economy is the first episode of Season 4, and the thirty-first episode overall. It aired on September 27, 2020.

An uneasy peace between two Kansas City crime syndicates is threatened by an untimely death. Meanwhile, the Smutny family is caught between a rock and a hard place.

In 1950, biracial Kansas City schoolgirl Ethelrida Smutny reads the opening of her history report in a voiceover, in which she quotes Frederick Douglass and makes the point that black people were considered criminals the instant they set foot in America. As she reads, she is sent to be disciplined by Principal Criscoe and watches another black student be paddled and then forced to shake hands with him. As he leaves, she is called in to go next. As she limps back to class, she details the history of organized crime in Kansas City.

Kansas City was first run by the Hebrew Moskowitz Syndicate, until the Irish Milligan Concern arrives in 1920. The two gangs meet in front of Joplin's, a bar used by whoever leads the town, and their leaders, Liev Moskowitz and Owney Milligan, spit in their palms and shake hands. The gangs start and perform a ritual to keep peace and foster cultural understanding in which the leaders of the gangs trade their youngest sons to raise as their own.

Ethelrida is again called to the principal's office to be paddled, having head-butted a student. She notes that despite being a student of high achievement, her punishments stem from the fact that she is both upstanding and black. She again limps back to class.

In 1928, Owney's son Patrick "Rabbi" Milligan double-crosses the Moskowitzes and allows the Milligan Concern to slaughter them in Joplin's. Milligan forces his son to kill Moskowitz's teenage son, and Ethelrida notes that peace never lasts for long. In 1934, the Italian Fadda Family takes root in Kansas City. Milligan and Donatello Fadda repeat the spit-shake in front of Joplin's and the trading of the sons, Rabbi being traded (breaking tradition of trading the youngest) for Fadda's son Josto. Rabbi eventually betrays the Milligan Concern and lets the Faddas kill them all. Donatello makes Rabbi shoot his father.

In her voiceover, Ethelrida defines the word "assimilation" as she solves a math problem in her segregated class. Too pained to properly sit down, she stands despite her teacher telling her to sit. She goes to her parents' funeral home after school, in which her white father Thurman oversees white funerals and black mother Dibrell oversees black funerals, and Thurman is currently working. She passes by nurse Oraetta Mayflower, who apologizes for her emotional state. When Ethelrida tells her it is natural to cry during a funeral, Mayflower casually observes that she is smart for her race. When Thurman introduces himself as Ethelrida's father, Mayflower looks between them and at their skin, amazed, comments (while comparing Ethelrida to an animal) that her mother must have exceptionally dark skin, and leaves.

In 1949, black gangster Loy Cannon approaches the Fadda Family in front of Joplin's. Fadda observes that he has come alone, until Loy whistles and several members of the Cannon Limited join him. When Fadda offers a spit-shake, Loy rejects it and cuts his palm. Fadda does the same and the two shake hands. Before the son trade, Loy's right hand Doctor Senator asks if he is sure, reminding him of what happened to the Milligan Concern, but Loy insists. Loy trades his reluctant son, Satchel, for Fadda's youngest son Zero, who Fadda instructs to "learn everything." Before Zero leaves, Rabbi tells him to be who he needs to be but to not forget his identity. In voiceover, Ethelrida notes that no one in the room was white, and that they were all fighting to be considered equal in America. She concludes that history is made of the actions of individuals, who at the time do not understand that they are making history. She arrives home to see her parents talking with Loy and two of his henchmen, and her mother sends her to her room.

Loy and Fadda meet in a playground, and Loy asks after his son, who Fadda says is being good. As they talk business, Loy reminds Fadda that they are both equally worthless in America's eyes. A now adult Josto antagonizes Loy's men, and narrowly avoids a fight when Fadda man Constant Calamita stops him, making a throat cutting motion as the meeting ends and the gangs part ways. Josto demands in the car that they move in on Cannon Limited, but Fadda warns him to be careful. Calamita reminds Fadda that his younger son Gaetano is coming from Italy to see his mother, which annoys Josto, not wanting his brother to intrude on his leadership. As the cars stop for a crossing guard, both Rabbi and Calamita notice two Cannon Limited members eyeing the cars. Both of them open the side doors, their hands on their weapons, but the men cross the street peacefully. Fadda starts to convulse, but the men realize he only had to pass gas. Two boys playing with cap guns nearby accidentally hit Fadda in the neck, severing an artery. The Italians speed to the nearest hopsital. The nearest hospital's administrator, David Harvard, turns them down because of their Italian heritage and sends them away.

Loy and Senator meet with banker Clayton Winckle and pitch their idea of the credit card, which Loy says already has a hundred businesses backing it. He asks Winckle to show it to his customers, but Winckle turns him down, saying customers would not be interested. Loy drops his polite demeanor as he leaves the office. At a public hospital, Fadda has the pellet removed but has lost a great amount of blood. Josto orders two men on an all-night guard, and ends up doing drugs with Mayflower in a back office. He notes that he hates seeing his father in pain, and asks Mayflower to take care of him. Ethelrida asks her parents about Loy and his men over dinner, but they refuse to answer. Loy promises his wife Buel that he will get Satchel back as soon as he destroys the Faddas.

Interpreting Josto's request as euthanization, Mayflower easily slips past a sleeping Antoon Dumini, and injects Fadda's IV with an unknown substance. She sits on his chest and holds his hands as he struggles and dies. She removes a ring from his finger and pockets it. Ethelrida watches from her porch as Mayflower returns home as Thurman comes out and sits with her. She asks him what is going to happen to her in the world, and he says she just needs time to find her place. When she again asks after Loy, he brushes it off as money troubles that they are easily solving. He offers to read her The Wizard of Oz until she falls asleep, and she accepts. As Oraetta watches them from her apartment window, the creaking of wood can be heard and a figure stands in the middle of the street. 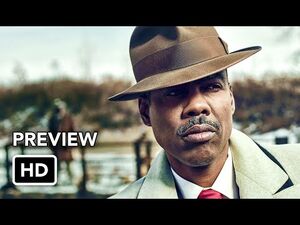