Unaired pilot is an earlier attempt at making Fargo into a television series.

In 1997, a pilot was made for a television series that would continue the story of Marge Gunderson, who investigates the murder of a pharmacist while still pregnant. The pilot did not air until 2003, but did not get picked up for any more episodes.

The opening shot shows a stalled car in the parking lot of the Great Plains Mall. Bob Trotter, the car's operator, is having a hard time starting it. He gets out and opens the engine compartment as another car pulls up next to him. A woman gets out of the car and helps him jump-start it. As Bob gets back into his car to start it back up again, the woman walks up to his car with a shotgun and shoots him to death.

Norm Gunderson arrives at home with a package where Marge Gunderson is on the phone with Lou. Once she gets off the phone, she tells Norm about Bob Trotter's murder. Norm says he always liked Bob. The two of them discuss Norm's new paintings and sculptures, which Norm says are no good. He suggests he move them down to the cellar to their fumes possibly having an effect on the baby, however Margie says what would a bedroom be without a painting of a loon. As she is getting ready for work, she exclaims her excitement for the baby which is due in five weeks.

Elsewhere on a frozen lake, there are a bunch of small fishing houses set up. Inside one of them is a man who has frozen to death. After his body is found, Lou visits the man's son, Sonny Anderson, at his auto shop. Lou tells him his father is dead, and tries to soften the blow by saying he died peacefully with a fish caught on the hook. He says the body will be taken to the funeral home. Once Lou leaves, Sonny takes one last look into his father's office before heading to the funeral home.

Sonny's brother, Fritz Anderson arrives in a taxi at the Anderson residence with a bag of luggage. He knocks on the front door, but no one is home. He sees a not on the front door saying they are at the funeral home, so he quickly waves down the taxi but it is already driving away.

Marge arrives on the crime scene of Trotter's murder where Lou and David are investigating. Lou believes it was a professional hit put out on the man, however Marge looks inside the car and proves otherwise. She finds the shell casings, which David says cannot be tracked due to them being custom-made. Marge suggests they find someone who makes their own bird shot. David also tells her they found a good set of footprints to go on, a size 8 shoe.

At the funeral home Mr. Shop, the funeral home director, sits down with Sonny and Mrs. Anderson to discuss Norb's casket. Mrs. Anderson immediately bursts into tears as the conversation begins. Sonny says Norb always wanted a mahogany fishing boat, suggesting the casket be made out of that. Shop tells them they have plenty of time to make a decision as they won't be able to bury to body until later in the spring, much to the family's distraught. Fritz enters the home and reunites with his family after being away for some time.

More will be added later. 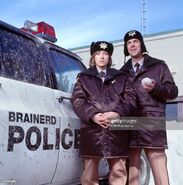 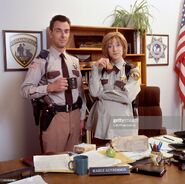 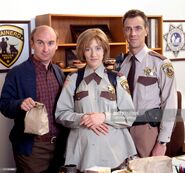