Loy retaliates, Josto asserts his leadership, Ethelrida makes a disturbing discovery and the walls begin to close in on Odis.

Ethelrida Smutny hears noises in the middle of the night, and opens her bedroom door to find a decaying man sitting on her steps. Terrified, she closes the door.

Riding shotgun on a shipment of guns, Constant Calamita is attacked when Cannon Limited men trap the truck in a lit circle of gasoline. Opal Rackley throws the driver into the flames. When Calamita defiantly insults the men, Omie Sparkman holds the barrel of his gun in the fire and scars Calamita's cheek with it, who stays silent the entire time. The men leave him in the fire, taking the truck.

Security has been increased for the meetings between Doctor Senator and Ebal Violante. Violante muses that after learning about America's violent history of prejudice, he has concluded that "American values" is pretending to be someone else. When Violante accuses the Cannons of breaking the peace, Senator retorts that the Fadda Family tried to have Lemuel Cannon killed. When Violante expresses confusion, Senator realizes he was unaware. Violante leaves, saying he will talk to Senator later.

Loy Cannon sells two hundred of the guns seized from the Faddas to gangster Mort Kellerman in exchange for an alliance, and the Cannons keep the rest. He orders his men to find Zelmare Roulette and Swanee Capps following their robbery, and Senator tells Loy it is most important to figure out whether Josto or Gaetano Fadda is in power. Loy affirms that no matter who is, he will kill them all if they try to hurt his family again. Josto and Oraetta Mayflower have begun a sexual relationship, in which she chokes him during intercourse. Mayflower voices her fantasies about running away with him, but he is determined to kill David Harvard. He opens the door just as Ethelrida, outside, is about to knock, and he leaves hurriedly. She has come to ask about Mayflower's job offer, knowing her parents are in debt. Initially resistant, Mayflower agrees, and details Ethelrida's housekeeping tasks.

Rabbi Milligan warns Josto about his forced and failed hit on Lemuel, leaving Josto furious that Gaetano disobeyed his orders. He tells Rabbi to keep his ears open for any more erroneous activity, and to send Odis Weff to him immediately. Weff and Dick Wickware are questioning a man who saw Roulette and Capps at his place of work. The man has actually been paid off by Weff to try and convince Wickware that the women are leaving for Chicago, in hopes of getting him out of Kansas City. Not taking the bait, Wickware says he will stay in KC and send other Marshals to Chicago to investigate. Rabbi approaches and signals Weff, who excuses himself to go meet an "informant." Wickware invites himself along regardless.

Josto storms a meeting where Gaetano is planning his next move and fires shots next to him. He lambasts Gaetano for his recklessness and spurring Cannon Limited on to take their guns. As Gaetano advances on him, he gets him to stop by pointing his gun at his genitals. As they leave, he attacks Paolo Endrizzi when he tells Gaetano to let it go, but is stopped from hurting him by Calamita. Wickware waits in the car while Weff meets Josto in Joplin's. Wickware notices Gaetano pacing around out front and approaches him, asking him about the nature of the store, and is nearly attacked until Calamita intervenes. When he tries to threaten Wickware off the property, Wickware tells him about his home in Salt Lake City, and how he and the men of the town killed the Italian criminals who tried to set up shop there and gets back in the car. Josto orders Weff to deter Cannon Limited from fighting, and sends Violante to the bosses in New York and assure them that everyone is under control.

As Ethelrida cleans Mayflower's house, curiosity gets the better of her and she opens the closet Mayflower shooed her away from. Inside, she finds poisons ranging from laxative to lethal. Mayflower's cat knocks over a box, and inside she finds dozens of clipped obituaries. She notices another box, this one filled with various items, including Donatello Fadda's ring and a bracelet that the name engraved on it matches one of the names of the obituaries. When the phone rings, she quickly puts everything back in its place, forgetting to retrieve her journal and shutting the door.

Loy and his men corner Rabbi on the street, who warns them that the Faddas and himself by extension are protected by the police. He insists that he botched the hit on purpose to protect Lemuel. Loy tells him that the Faddas do not respect him as an equal, and reminds him that he killed his own father. He offers Rabbi five thousand dollars to bring Satchel Cannon back to him, but Rabbi insists it would be too dangerous. Loy tells Rabbi he will kill him if either of his sons are harmed. Ethelrida reads an obituary she took from Mayflower while she fingers Donatello's ring. Shacked up in a hotel, Roulette washes the vomit-tainted money in a bathtub. She checks on Capps, still recovering and in pain. The figure seen by Ethelrida rises out of the tub and circles Roulette as it rains from the ceiling onto Capps. Roulette closes her eyes until it vanishes, identifying it as the "Snowman." She goes to see Thurman Smutny, who tells her his neighbor made the poisoned pie. She gives him money to pay off his debts to Cannon Limited and refuses to elaborate where she got it.

Thurman pays off Loy, who tells him he got it from a dead relative. After he leaves, Loy smells vomit on the cash and realizes it is the money robbed from him. Thurman comes home to Dibrell and Ethelrida to celebrate being out of debt. Dibrell realizes Roulette was involved somehow, and when he refuses to elaborate, she leaves the room. Now anxious, Thurman tells himself and Ethelrida they will be alright, and she hugs him. 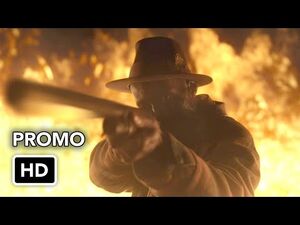