Loy plays with fire, Josto wears his heart on his sleeve, Oraetta makes a surprising discovery and Deafy closes in on Zelmare and Swanee.

Josto Fadda speaks to Dessie Gillis about their upcoming marriage, wanting to wed on election day, but Milvin Gillis warns Josto that he will not be marrying into the family if Gillis does not win the election for mayor. Intercut with this are scenes of Josto and Oraetta Mayflower having intense sex that involves Josto being tied up and smothered. Post-sex, Josto asks if she likes being a nurse, to which she says it is her calling. When he tells her of his upcoming marriage, she accepts it without complaint. Mayflower muses on her childhood, a victim by her mother of Munchausen syndrome by proxy. When Josto gets up to use the bathroom, Mayflower calls the hospital David Harvard is being treated at. She is horrified to learn that he survived his poisoning and is making a full recovery. She hangs up when Josto returns, her story allowing him to open up and imply that Owney Milligan may have sexually abused him as a child. Mayflower cuts him off, not interested, and Josto tells her he loves her, sending her into a rage (and causing her to curse for the first time in the season) in which she orders him out before leaving herself.

Josto goes to the Fadda Family's club to find Gaetano has been released from the Cannon Limited. Gaetano attacks and knocks him unconscious. When Josto wakes, he finds that Gaetano is immensely proud of him for having Satchel Cannon killed, believing that Loy Cannon lied to him in hopes that he would kill Josto and tear the family apart from the inside. Gaetano pledges his loyalty to Josto, who quickly rolls with the presented narrative, Ebal Violante the only one in the room unhappy with this. Hearing of the brothers' strengthened bond, Loy decides to call in Mort Kellerman, his contact in Fargo.

Buel Cannon visits Dibrell Smutny at her funeral home, hoping that Satchel's body is there for her to see. Dibrell asks for an opportunity to make things right with Loy, and while Buel does not answer her, she asks if the Smutnys will hold Satchel's service. Dibrell accepts. Ethelrida examines Donatello Fadda's ring as she is approached by Lemuel Cannon, who compliments her taste in music. He mentions that he wants to play the trumpet as Dibrell shows him out to his mother. When he leaves, she warns him to be careful around Lemuel, as the family cannot afford to makes mistakes with the Cannons. Mayflower learns that the hospital suspects Harvard of being poisoned and he has been transferred out of state. She hurries home to pack her things. While she packs up her trophy closet, she finds the journal Ethelrida left behind, and realizes she was responsible for writing the letter to Harvard when she compares the handwriting.

Opal Rackley guards Loy's car while he waits outside his house, and is approached by Dick Wickware. Inside, Loy refuses to help Wickware find Zelmare Roulette and Swanee Capps, and Wickware describes Loy as having the "criminal mindset," or using the criminal code Loy goes by to detach himself from basic morals. When he asks why Loy is comfortable trading his son for power but not so giving up two strangers, Rackley tries to pull a gun on him, but Wickware draws first. When he describes himself and his fellow Mormons as "very friendly people," Loy disagrees and claims that it is more "the way you're unfriendly. Like you're doing me a favor." He gives them the women's location and orders him to leave, telling him he is not welcome in Missouri anymore. Wickware instructs the Kansas City police on their strategy for capturing the two, and Odis Weff approaches him after a phone call to help. He claims he was on the phone with Loy, who wanted to make sure they caught Roulette and Capps. Wickware decides to take him along.

Wickware and Weff arrive at Chicago's Union Station, where Roulette and Capps are waiting to board a train to Philadelphia. Wickware and his men head inside, while Weff succumbs to his OCD and frantically locks and unlocks the car door. The men spot the women, and Wickware reminds his men to only kill if they are attacked. Capps spots Snowman in the crowd while Roulette locks eyes with Wickware. The women draw their guns and kiss before they fire on the police. Weff finally talks himself into going inside when he sees people run out, and finds a couple dozen cops and civilians dead. He heads further in to find Wickware cornering the women, finally having run out of bullets. He orders Weff to cuff them, but Weff kills Wickware and Capps on Loy's orders. He tries to kill Roulette (who also sees Snowman) but misses, and she runs past him and out of the station.

In their backyard, Gaetano and Josto share a drink together. Josto tells him about Constant Calamita's mission, leaving Gaetano impressed again that Josto successfully convinced Loy his son was dead and managed to profit off of it. The Kellermans shoot up the house, killing the Fadda soldiers hanging around. Gaetano singlehandedly wards them off, killing two in the process. Their sister Maxia screams from inside the house, and they run in to find their mother dead on the floor. 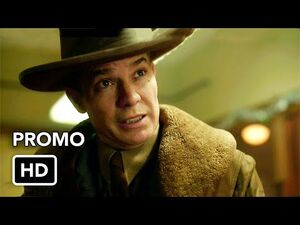