The Birthplace of Civilization

The Birthplace of Civilization is the fifth episode of Season 4, and the thirty-fifth episode overall. It aired on October 18, 2020.

Josto strikes back. Ethelrida does the right thing. Loy finds himself against the ropes and Deafy shakes the tree.

Lemuel Cannon, Leon Bittle, and several Cannon Limited men are beaten and arrested at a jazz club while Josto and Gaetano Fadda watch from across the street. Josto tells his brother "that's how it's done," and Gaetano leaves in a huff. Josto remarks to Antoon Dumini that he hates his brother. Loy Cannon sells the Fadda Family's stolen guns to Mort Kellerman in exchange for an alliance. When Kellerman asks if they are going to war with the Italians, Loy says it depends, and does not elaborate what it depends on. After the Kellermans leave, Loy orders Omie Sparkman to go to the Smutnys and take over their funeral home, and let them live if they give up Zelmare Roulette and Swanee Capps. Odis Weff's men burst in before anyone can leave. As Weff takes the money from the Kellerman deal and moves to leave, Loy taunts him by telling those present the story of Weff's stint as a minesweeper in World War II, in which the loss of his fellow soldiers to failed sweeps caused him to suffer a mental breakdown and neglect his duties, which led to the death of a colonel. Weff orders everyone but Loy out, and warns him that "Josto Fadda says stick to the deal." Dick Wickware watches Weff leave from across the street.

As Oraetta Mayflower is irritated by a patient incessantly moaning in pain, Ethelrida Smutny writes a letter to David Harvard warning him of Mayflower's involvement in multiple hospital-related deaths. When her father drops by, she asks him about one of the medications she saw in Mayflower's closet, and he tells her it is a painkiller that could be lethal if too much is taken. She asks him about Roulette, and he tells her where she is but warns her not to go, as well as to be wary around Mayflower. Mayflower bangs her head against the wall, worn thin by the patient's moans.

Josto tells Rabbi Milligan that he believes Gaetano will go back to Italy soon, but Rabbi warns him that Gaetano will likely bring in men to help him take power. When Josto leaves, Rabbi tells Satchel Cannon that they will have to run when the shooting starts. Now seventeen years old, Ethelrida visits Roulette. She asks what Roulette would do if she saw something bad happening that she could stop, and Roulette says she would not, as it is not an outlaw's business, and tells Ethelrida she is a bit of an outlaw herself. Loy stops his wife Buel from getting either of their sons back by force, and shouts at her that they only have a good life because they do things his way.

Bittle, Omie Sparkman, and Opal Rackley argue in a holding cell over whether or not Bittle is liable for Lemuel's arrest when Josto visits them. He tells them to tell Loy that he must surrender, and that he will always win because of his skin color. Rabbi stays behind after Josto leaves, urgently asking what Loy's plan is. When they refuse to tell him, he says he'll continue trying to keep Satchel safe. When Rackley tells him to bring him back home, Rabbi tells him it is pointless because they are all going to die. Wickware visits Weff at his apartment to ask about his raid on the Cannons. He notes a picture of a girl on Weff's wall, and Weff tells him it was fiancee who was raped and murdered while he was in the war, the event that forced his breakdown.

Gaetano slips on a patch of ice while walking to a bar, and the young janitor laughs at him when he does. Inside, Gaetano and Constant Calamita discuss their plans, but Gaetano derails it when he notices the janitor and calls him over to berate the coffee and his failure to clean the ice, and rambles about his distaste of America's soft, effeminate depiction of Christ before abruptly shooting the janitor and bartender. While Thurman and Dibrell prepare Ethelrida's cake, Loy comes to visit with Zero Fadda. He tells the Smutnys he believes they are behind the robbery, and explains that he traded his own son for Zero, showing them he will do whatever it takes to triumph. He orders them to sign over the deed to their business, and tells them he will let the family live if they give up Roulette and Capps.

Wickware visits Ethelrida's school and has the principal call her to the office. He questions her about her aunt, telling her about her needlessly violent crimes, and tells her that if she wants to be regarded as civilized, she must act as such. She retorts that Africa is regarded as "the birthplace of civilization" and that they both came from the same place. He threatens to get her expelled if she does not talk. The Cannons are freed from jail, and Loy has Bittle take Lemuel home before taking men to get Roulette and Capps. Wickware, having gotten their location, drives to their hotel and calls for backup. Loy arrives first, but recruits them instead of killing them, impressed with their style. Wickware arrives in time to see them be driven away.

Doctor Senator goes to meet with Ebal Violante, but instead finds he is meeting with Calamita, Gaetano watching from a nearby table. Senator refuses to sit down, and Calamita tells him the peace talks are over. He tells Senator of how he came to America as a baby in a box, his teenage mother dying of illness shortly after. He warns Senator that nothing is more dangerous than "an orphan in a box," and tells him to remember that when he is dead in the street. Senator retorts that Violante earned his respect, despite their differences, and Gaetano and his men are children making a mess that Senator will have to clean up. Calamita follows Senator into the street and kills both him and his driver. The Cannons arrive on the scene as police sirens sound, and Loy reluctantly leaves his body in the road. 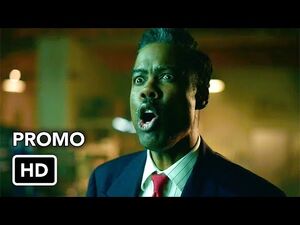