As police dogs track the scent of Zelmare Roulette and Swanee Capps to the bar where they changed their clothes, U.S. Marshal Dick "Deafy" Wickware gingerly parts his hair in the bathroom mirror. He meets with Kansas City police captain Martin Hanhuck after he tracks the convicts there, wanting someone familiar with the area to help him. Hanhuck assigns Odis Weff to him, and they go to Dibrell Smutny's house on account of her relation to Roulette. Weff becomes defensive when Wickware asks about his tics as they stake out the house. They storm the house and sweep it, and Wickware notices five places set at their dinner table when there are only three people in the house. Weff and some men search their basement, which has multiple morgue lockers. They begin to search them, only to be put off when they pull out an exceptionally decaying and bloated body. As they leave, Roulette and Capps slide out of the one they were about to search. As Dibrell convinces Wickware that she has not seen her sister and would turn her in if she did, Ethelrida Smutny notices the two looking around a corner, Roulette holding a shotgun. She quietly convinces them to continue hiding, and Wickware soon leaves with his men.

Doctor Senator and Ebal Violante have one of their regular meetings at a diner to talk business. Senator promises that Donatello Fadda gave Cannon Limited the slaughterhouse, but Violante is still disbelieving. Senator tells him of his time in World War II, where he took part in the Nuremberg trials and interviewed Nazis. He was eventually authorized to interview Hermann Göring himself, and spent six weeks interviewing, analyzing, and writing up the man. When he showed it to his colonel, it was thrown in the trash. He convinces Violante to respect Donatello's deal and leaves.

Rabbi Milligan explains to Satchel Cannon the origin of his nickname, owed to the eight years he spent with the Moskowitz Syndicate. Gaetano Fadda strolls in, reminiscing about his own childhood during the fascist takeover of Italy, as well as telling Satchel about Rabbi siding with the Italians and killing his own father. As he sits behind Josto's desk, Josto himself enters, furious that Gaetano took care of business at the slaughterhouse without Josto's order. He orders everyone out of his office, and warns Gaetano to either follow his orders or leave. Gaetano takes a picture of Italy hanging on Josto's wall.

Oraetta Mayflower gets a job at David Harvard's hospital while Josto watches him through his window. Mayflower notices him in the parking lot and gets in his car. Despite the fact that Josto cannot remember her name, Mayflower does cocaine with him and gives him a handjob. He asks for her name when they finish, but she ignores him. Loy Cannon and several Cannon Limited members walk to one of their warehouses when they are stopped by an impoverished, hungry local asking for money. Loy makes like he is going to give to him, but then puts it away, using it teach his son Lemuel a lesson about money's effect on people. As the man walks away dejected, he walks by Roulette and Capps, who are staking out the warehouse with plans to rob it. When Leon Bittle asks for more responsibility, Loy assigns him to be Lemuel's driver and keep him out of trouble. Senator notes to Loy that he has too much hubris, and hubris is why God created tornadoes: to put men in their place.

Annoyed with Josto's approach to leadership, Gaetano orders Constant Calamita to kill one of Loy's family and to take Rabbi and ensure his loyalty. Calamita and Rabbi drive to Lemuel's college and follow his car. Horrified when he realizes they are going to kill Lemuel, Rabbi insists his murder will start a war and get Zero Fadda killed, but Calamita ignores him. When Calamita refuses to answer if the hit was an official order, Rabbi stalls shooting long enough for Bittle to notice him and speed off. When Calamita tries to fire after them, Rabbi holds his gun to his head. When Calamita tells him he is dead, Rabbi retorts that he disagrees, seeing as the order likely did not come from Josto. He gets out and walks home.

Capps eats Mayflower's poisoned pie while she asks Dibrell if the Smutnys are cursed, having heard it from Roulette. As Roulette comes downstairs with Thurman's shotgun, Dibrell orders Ethelrida upstairs as Thurman comes down, saying he is going to drive the two somewhere in the hearse. They get in the coffin in the back of the hearse, where Capps starts to experience gastrointestinal pains. Capps is still sick as they wait for Loy to enter the warehouse, but they get impatient and burst in, killing three Cannon Limited men. As Capps starts to vomit, the man running the warehouse, Omie Sparkman, attempts to kill them with a concealed shotgun. Roulette takes all the money on his table and only spares him because of Capps' increasingly distressed state.

Bittle and Lemuel explain to Loy what happened to them. When Lemuel says they were really shooting at Loy and he is just a proxy, Loy rebuffs him, saying his last name makes him Loy, not an extension of him. As Lemuel leaves, Senator explains that the women took $20,000. Loy orders security tightened, and Senator theorizes the Fadda Family's inconsistent actions could indicate Josto and Gaetano are fighting for power. He tells Loy that once they start firing back, it will not stop until one of the organizations is dead, so they must be sure of when to start. 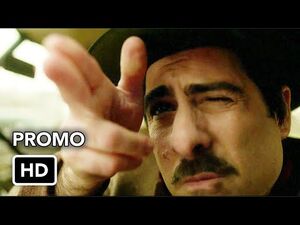