Strangled to death by Opal Rackley

"Welcome to the Alternate Economy"

Leon Bittle is a character in Fargo Season 4.

Leon came to town with Loy Cannon and the Cannon Limited. They immediately faced off with Donatello Fadda and the Fadda Family. They called a truce by each of them slitting their palm and shaking hands. They later exchanged sons, Satchel Cannon for Zero Fadda.[1]

When the Cannon Limited invaded the slaughterhouse to take it over, Leon went to Doctor Senator and said he'd like more responsibility, that he was good for more than muscle work. Doctor agreed to discuss it after they were done transferring power.[2]

Leon next went directly to Loy, asking for more responsibility. Loy made him Lemuel's driver and bodyguard, telling him to keep him on the path as he was worried Lemuel was straying from the family. Later, when Calamita and Rabbi pulled up next to them in the car, Leon noticed that they had a gun and drove off as Calamita fired.[3]

Leon continued to guard Lemuel. One night, while Lemuel was at a jazz club, the cops came in. Leon tried to get Lemuel out the back, but the police surrounded them and they were arrested, along with other members of Loy's crew. While they waited for Loy to bail them out, Josto visited them, warning them that they should tell Loy to give up. Later, Leon took Lemuel home under Loy's order.[4]

After Gaetano was kidnapped, Leon told Loy he thought they should kill Gaetano. He also said again that he was more than just muscle and indicated that he had aspirations to replace Doctor in Loy's crew. Loy was angry at this and punched and whipped Leon until Omie stopped him, saying he's Happy's cousin and they needed Happy.[5]

With his cousin Happy in town, Leon met with Happy, Josto, and Gaetano to talk about Leon assuming power from Loy with Happy's help. They sat down to negotiate a deal between them.[6]

Wanting to get Loy out of the way so he could assume power, Leon went to Loy and attempted to kill him. However, before he could, Opal came up behind him and strangled him.[7] 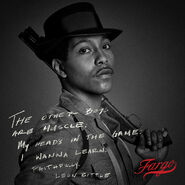