Oraetta Mayflower poisons David Harvard in his office with a batch of macarons and retrieves the letter written by Ethelrida Smutny from his desk. As Harvard's vision starts to turn red, he sees Mayflower standing over him and smiling, framed by stone wings chiseled outside his office windows. She waits for him to stop moving, then calls for help.

Josto Fadda and Constant Calamita find Antoon Dumini's body. Knowing Rabbi Milligan is responsible, Josto orders Calamita to kill him and Satchel Cannon, as well as anyone who gets in his way. Loy Cannon and the Cannon Limited debate what to do with Gaetano Fadda. Leon Bittle insists they kill him as revenge for the murder of Doctor Senator, angering Loy with his presumptuousness. When Bittle says they should go to war, Loy grills him on what their strategy is, and begins to beat Bittle when he references Loy needing a new advisor following Senator's death. Opal Rackley pulls him off, reminding him that Bittle is the cousin of powerful mobster Lionel "Happy" Halloway, and they need Halloway's backing if they want to win the war. Loy gets a phone call from someone, and orders them to meet him at 3:00.

Odis Weff tics while watching a Cannon building from his car. Dick Wickware gets in with him uninvited, believing Weff is staking out the place so he can capture Swanee Capps and Zelmare Roulette. Wickware tries to get Weff to confess to his corruption, and Weff angrily orders him out of the car. Buel Cannon is visited by Calamita, looking for Satchel. When he continues to exhibit strange behavior, she points a shotgun at him until he leaves. Ethelrida watches the Cannons take over. She shares an awkward moment with a worker before going upstairs, and the coffin in the room opens to reveal Snowman inside. It shuts before the worker looks at it. Searching Rabbi's room, Calamita finds a coupon for a store in Liberal, Kansas. Josto and Ebal Violante arrange to meet with Loy, Rackley, and Omie Sparkman in one of the Cannon buildings. Josto orders his men to attack if he's not out in thirty minutes while Wickware watches from across the street.

Violante apologizes to Loy on behalf of the Fadda Family for things getting out of hand and for the murder of Senator, begging them to not kill Gaetano because of New York's demands. Violante offers him territory for Gaetano's life, plus Gaetano being sent back to Italy if he is released. Josto interrupts and lies to Loy, saying Calamita killed Satchel and Milligan, who "died" protecting the boy. He acknowledges that while it would be right to kill Zero Fadda following this news, he should instead kill Gaetano. Sparkman suggests killing them, but Loy, remembering his son begging not to be traded, orders Josto and Violante out. Later that night, he again thinks about Satchel while he watches Zero Fadda washes his hands before bed. Loy considers killing him in retribution, but decides instead to tell his wife, who is devastated. The next day, Loy notices a billboard with a white family featured advertising the credit card.

Weff thinks about his fiancee as he packs his bags to leave town. Before he can get in his car, Sparkman and Rackley force him to get in theirs and take him to Loy. Roulette and Capps enter while he waits for Loy and taunt him, until Loy comes in and orders them to leave town and not return. Loy muses to Weff that Josto wants him to sink to the Fadda's level by killing Gaetano, but he is above that. He states that every country has its own brand of criminal, and America's is the con man, the kind that tricks a person into robbing themself. When Weff asks him what he is going to do, Loy counters with "what are we gonna do?" A badly beaten Gaetano mutters the names of the people he has killed and the methods employed as Loy enters. He tells Gaetano about the deal he was offered, and how Josto approved him having it all so long as he kills Gaetano. Instead of killing him, he orders him released, although he will still be taking the land offered in the deal. Outside, Loy orders Sparkman to find and kill Calamita. Rackley remarks that he hopes Loy knows what he is doing. 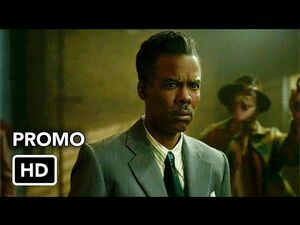