Loy goes on the attack, Gaetano pays the piper, Oraetta goes off the deep end, Josto challenges orders and Rabbi puts his life on the line.

Ethelrida Smutny comes home to find her parents waiting for her. They hug her tightly, both distraught, and sing her happy birthday while she blows out her candles. Odis Weff is attacked in his home by a Cannon Limited man, and is nearly suffocated with a shower curtain before more Cannon men and Loy Cannon enter and poke a hole in it at the last second. He examines Weff's collection of porcelain dolls, musing that he is not fighting the Fadda Family but four hundred years of history. He tells Weff that he is now the Cannons' property, and he is to help Loy win the war by any means necessary. Dick Wickware watches the Cannons leave Weff's apartment.

Zelmare Roulette and Swanee Capps pose as prostitutes to infiltrate a house with several Fadda men inside, including Gaetano, who is on the second floor. They kill all of the men there except Paolo Endrizzi, who Gaetano shoots through a door when he believes he is the women coming to kill him, and Gaetano, who is non-fatally shot in the head by Capps. Too heavy to carry, they drag him out on a rug. He awakens in a Fadda warehouse chained to a chair. Loy explains that he is going to kill him for the murder of Doctor Senator. Unafraid, Gaetano laughs loudly and eggs on ex-boxer Omie Sparkman, who advances on and starts to beat him.

Oraetta Mayflower is called to meet with David Harvard, who has received Ethelrida's letter regarding her. She admits only to going to the funerals of her patients, and manages to pass it off as a petty squabble between women. Harvard lets her off, but tells her she cannot go to any more funerals. He stashes the letter in his desk drawer. Ebal Violante returns from New York with mobster Joe Bulo, and Violante sits down with Josto Fadda. Violante tells him New York is behind Josto on two conditions: fix things with Cannon Limited, but he is interrupted by Constant Calamita, telling him that Gaetano has been kidnapped for Senator's murder. Violante is horrified to learn of his friend's death, and Josto decides to leave Gaetano to die. Violante explains the second condition: Josto must form a healthy relationship with his brother.

Loy sits alone in his office, thinking about his last conversation with Senator, in which he expresses worry about Satchel. Senator says he will try to trade back through Violante, but warns him it will be war if the trade goes through. Loy orders Weff to bring Satchel to him, planning to kill Gaetano once his son is safe. Weff goes to the Fadda house and sees Satchel, but is interrupted by Calamita, who orders him to go see Josto. He lets him know that Gaetano's kidnapping means war. Violante and Josto discuss trading for Gaetano when Weff arrives, and Josto orders him to get rid of Wickware and find Gaetano. Calamita argues that Gaetano would rather die than trade with the Cannons, and Josto orders them all out after challenging Calamita's loyalty. He calls in Antoon Dumini, and orders him to take Satchel out somewhere and kill him, having developed a plan to keep Zero Fadda alive, pin it on Calamita, and leave Gaetano for dead.

Dumini sends Rabbi Milligan away and tells Satchel to come with him. Realizing what he is doing, his wife and Josto's siter Naneeda tries to stop him. Listening again to the moaning patient and thinking about Harvard's words, Mayflower hits her head against the wall. When Rabbi meets with Josto and is told he is being pulled off Satchel, Rabbi realizes what is going to happen to the boy and drives back to the Fadda house. He forcefully interrogates Naneeda and kills a Fadda man that interferes, getting their location.

Dumini drives Satchel to the Camp Elegance Relocation Center and walks him to a worn-down staircase. He shows Satchel where he carved his name, telling him about being an Italian POW sent to the Center after being captured, and how his name meant he was an official American. He takes out his pistol to kill Satchel while he is distracted, but is unable to go through with it. Just as he puts it back and Satchel turns to him, smiling, Rabbi shoots him from behind. He explains to Satchel that they are finally at war and the two of them have to run, not wanting Satchel to be caught in a gang war like he did. He promises to return Satchel as soon as the war is over, and the two drive away.

At the hospital, the moaning patient is suddenly silent and Mayflower emerges from the darkness of his room, grinning with relief. 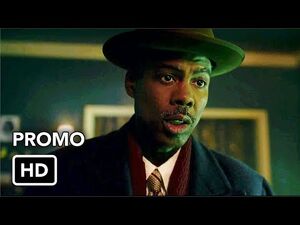